Many of you faithful readers might remember the “Storm Petrel”, a 33ft. Lobster-type boat that we built several years ago, and the “Pyladian” is an evolution and direct sister to that design. With the perspective of about 5 years between the two building projects and with a chance to spend many happy hours bugging about in the Salish Sea in the Storm Petrel, I found her to be, in my opinion, one of the best performing sea-boats that I have ever had the pleasure of running.

I remember heading north with my good friend George Gray (currently living with his wife on their sailboat and cruising the lovely waters of Mexico) to the Anacortes Trawler Fest show several years ago. It was a boisterous day with brisk winds of 25-30 knots coming out of the Southwest. With the fetch of Puget Sound and the short steep chop that can develop in those waters, it was a good test of what the Storm Petrel could do. With the following seas and our trying to maintain a pace of 16 plus knots of speed, the Storm Petrel would bound over the top of the crest of one wave and then pitch downward into the trough between the seas burying her bow into the wave just ahead of us till we could see water squirting up thru the anchor roller forward. Without slowing or slewing around in any way, she would then climb at the same speed up the face of the next wave reaching the top before pitching down again into the trough of the next. After about 30 minutes of this exhilarating ride, I remarked to George something about my amazement of such a remarkable ride to which he replied that he was impressed also. We chatted for a few more minutes about her amazing performance and no sooner had the words come out of my mouth, “we should turn around and try her head into the wind”, when I started turning the wheel. We did a good 15 minutes in reverse direction straight into the eye of the wind and those cresting waves with essentially the same results. The boat didn’t slow down and certainly didn’t broach or slew at the bottom of the troughs even when burying her nose deeply into the waves. Really, all in all, she showed remarkable capability for those seas, an incredibly pleasant boat to run on a day when I would normally wish I was home reading a good book by a warm fire. This combination of fine bow lines and entry with her broad and flat exit of run of the hull was literally the perfect example of what one would wish for in this type of boat. 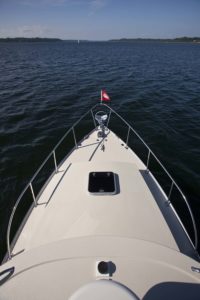 So after some years, along came a new candidate for a boat, this time a couple that was looking for a commuter boat to run from Vancouver Island, specifically Sydney, British Columbia, to their island home located about 34 miles north in the Canadian Gulf Islands. They needed her to be able to make good and economical speed so that they could spend their time on the island not just going back and forth to it. The boat needed to be able to handle anything from a few groceries to large units of wood, fuel, and all the myriad of items necessary for comfortable island life. The weather would not always be compatible to this lifestyle and so the vessel would need to be able to handle the weather in whatever form that would be presented to it. 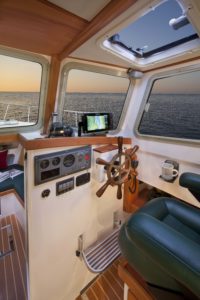 With those requirements set down, I had no hesitation in recommending the Storm Petrel type hull as a good model to choose from. But the customers wanted a single diesel (not the twin diesels that the Storm Petrel had) and needed the potential for more speed than the Storm Petrel boat had so the Yanmar 6LPA was chosen. With 300 horses under her engine box, the hull should top speed out at about 26-28 knots and cruise at 20 knots without difficulty. With the single diesel layout, the cabin changes considerably in its layout and in the potential layout options for the customers. De-emphasized was the need for berthing and a galley with those being way down on the list of priorities and moving up on the list was the need for handling tough waters at all times of the year and keeping a load of people warm and dry while being transported to the island for a visit.

Her overall size was limited to 30ft-6in on deck in order to fit her slip where she will be kept in Sydney and a bow thruster was added to couple with the single engine and give the owner greater control in a tight docking situation. A single seat was added across the stern of the boat for passengers on those nice sunny days but the rest of the cockpit was kept as open as possible to carry gear and stores. The final change was to slightly contemporize her appearance with a three pane forward windshield and twin sliding windows on each of her cabin sides. She is certainly no traditional appearing lobsterboat like the Storm Petrel was but I really have to say that I like the profile of this new “Pyladian” very much and look forward to seeing how her presence manifests itself on the water. Launching is expected in the late fall of 2013. – Sam Devlin

The Pyladian 31 is available as a custom build from Sam Devlin and his team. 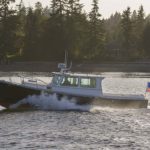 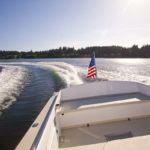 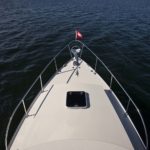 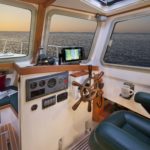 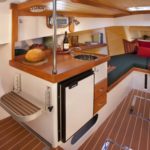 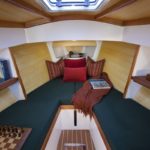 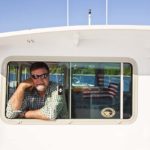 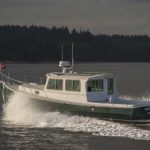 As always, if you have any questions about orders (past or present), don’t hesitate to get in touch!

Artfully Designed and Crafted Boats since 1978

Shop tours on Fridays by appointment