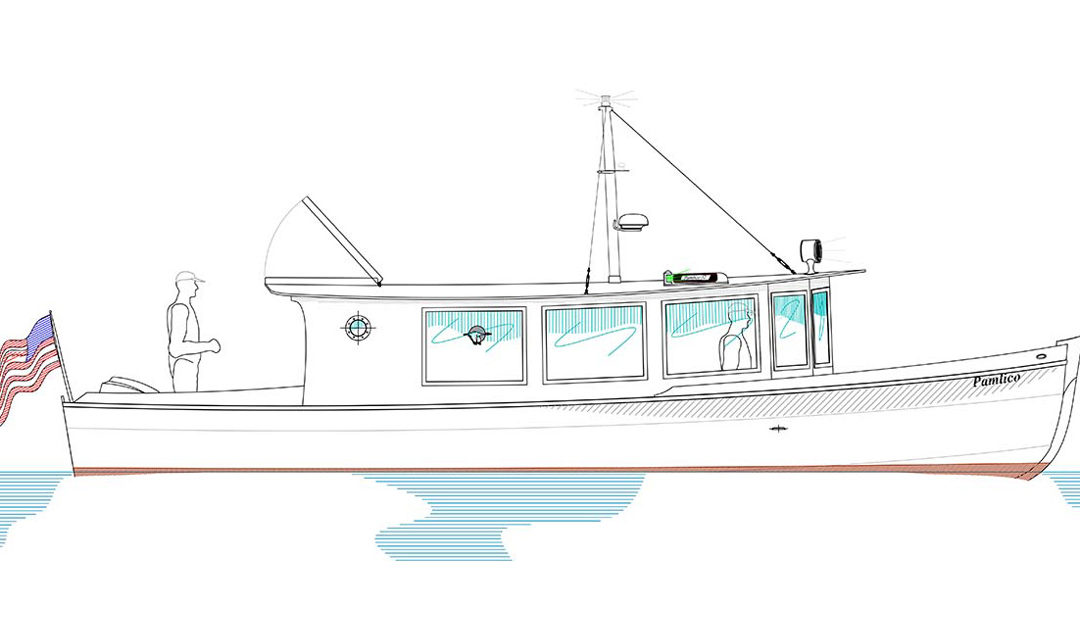 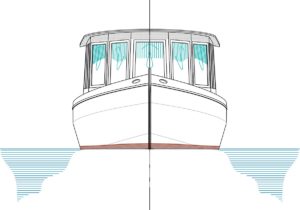 The Pamlico design was commissioned by Bruce Mierke, an accomplished and very skilled boatbuilder from the shores of North Carolina, for his own use as a potential stock model design that his shop could offer and as a vessel he’s dreamed about for his own personal use. She is really nothing more than a shallow water cruiser that almost serves the function of being a live-aboard boat. Highlights of the design are bracketed around the hi-thrust 60 HP outboard that should be more than enough power to allow her to run at her maximum hull speed of 7.5 knots and most likely be capable of providing her with bursts of speeds to 10 knots when called for. She is long and lean and will move thru the water without much fuss and or wave making action, an attribute that helps keep neighbors and other boaters in good spirits. The outboard is done in a semi-well type configuration which serves the purpose of allowing the outboard to be somewhat sheltered from the side view and when rotated to the lock up position, it does not allow the lower unit to extend beyond the end of the boat very far. You would be surprised at how often outboards get banged up by extending beyond the ends of the stern of the boat. The cockpit is 7’-2” wide and 5’-3” long and has room for a couple of folding deck chairs while still having enough space to move around. The side decks are only 6” wide back here and with the cockpit coaming extending up beyond the decks, they won’t serve the dual function of seating but there always are the two sponsons on either side of the outboard that can be sat on if necessary. One of the really neat features of the Pamlico design is that she is not restricted to just the aft cockpit area for socializing as she has a bow cockpit also. This one measures about 6ft long by 6ft wide, obviously narrowing at the bow, and is accessed by a hinged door on the front of the pilothouse. A bow facing cockpit like this works on the calm and protected waters that the Pamlico 32 was designed for but it would not be a feature I would look forward to on the more boisterous waters of Puget Sound or waters north. We tried that on the Czarinna 30 design years ago, originally built as a cruiser for Lake Union waters in the middle of Seattle, Washington but she was resold into the application of being a cruiser and she was very quickly converted to a flush raised deck type boat. The forward door would never seal up like I wanted and when running her in any kind of a sea, inevitably some green water would lap over the bow and squirt disconcertedly into my lap at the helm. But in this application, cruising on rivers and the protected inlets of the Carolinas, the Pamlico’s arrangements will work really well and allow us to have passengers on the bow deck, looking out at the waterways well separated from the outboard at the stern of the boat. With a cool breeze in the face, the day is always more pleasant.

Moving from the aft cockpit into the cabin of the boat, there is a hinged or sliding hatch in the overhead allowing crew to walk upright forward into the cabin without ducking into a doorway but there is a single step down to the cabin sole level. In the aft area of the cabin, we gave her one of the features that win high marks from customers and friends with a head to the starboard side and opposite the full headroom shower compartment on the port side. With the doors opened, there is room for dressing in the morning with privacy standing in the middle of the boat and with a full length mirror on the backside of the head door, you can run a comb thru your hair and look very presentable before the rest of the crew sees your morning face. Just forward of the head on the starboard side is a fore and aft dinette with room to seat two but by adding a folding leaf to the table, there is space to seat another two on the portside settee itself. The same settee can be used as a day bed type lounging area if one is inclined to take a quick nap in the afternoon and with the table hinged down on the starboard side, the sleeping areas are defined port and starboard. With some cleverness, the portside settee can be built as a slide out type configuration which would make up into a queen sized bed but Bruce insisted on not needing this feature in the plans. His statement about that was if the customer needed that feature he could certainly work that out on his own which is one of the benefits of working with an experienced builder.

Moving forward, the galley is to port with a hanging or storage locker on the starboard side just behind the helm seat. The whole idea of this type of cruising is so very different than the saltwater type of cruising that I am more used to. Here the boats need helm and co/helm seats configured so all can face forward and help the skipper see obstructions in the water and help with navigation. In the waters where Pamlico will make her home, the importance of having facing forward seating is diminished and the importance of other deck and lounging areas increases in value. Headroom in the houses is 6’-3” minimum and there is the feeling of room, space and great visibility from the house areas. Windows can be done as hinged or sliding types to keep lots of air moving about the cabin. Keeping the boat and its systems simple is really one of the keys to keeping her loved and used.

She is relatively lightweight despite her length and with the beam at 8’-4”, she is legally trailerable without any special permits in all states and at all hours of towing. This type of boat use is really tempting to any person that loves the water. Imagine the adventures one could have with a boat of this volume and with these capabilities. We are offering the building plans set at $225 dollars for the download version and $255 for a paper set printed for you. There are a total of 13 sheets of drawings in the set with panel expansions done for you and everything designed for the stitch and glue building method. She is planked up with ½” marine plywood in the hull and has an additional layer of ¼” plywood cold molded on her bottom to keep her stiff and able for trailering. — Sam Devlin

The Pamlico 32 is available as study and full construction plans. 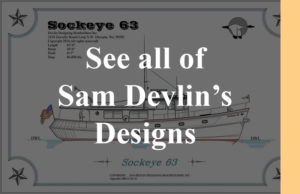 With the advent of our new website and reorganized online store, all existing user accounts have expired and been deleted.

As always, if you have any questions about orders (past or present), don’t hesitate to get in touch!

Artfully Designed and Crafted Boats since 1978

Shop tours on Fridays by appointment